UP AND COMING—Amie Krause, senior vice president and chief people officer for Atara Biotherapeutics, speaks on a panel April 8 during the Greater Conejo Valley Chamber of Commerce’s annual economic forecast. The event was held inside a movie theater at Janss Marketplace.

A group of panelists representing Thousand Oaks biotech players big and small laid out their wish list this month at a regional economic forecast hosted by the Greater Conejo Valley Chamber of Commerce.

The April 8 event, moderated by Assemblymember Jacqui Irwin, offered fresh insight into the wave of life-science activity happening in the Rancho Conejo Industrial Area and what the companies involved in it feel they need to keep the momentum going.

“I mentioned to somebody recently, if you have the best science on Rancho Conejo Boulevard, you probably have some of the best science in the whole world,” said Rob Murphy, vice president of manufacturing for Capsida Biotherapeutics, a startup working in the gene therapy space. “It’s pretty cool what’s going on here.”

Murphy was joined on stage at Regal Janss Marketplace by executives from Atara Biotherapeutics, Takeda Pharmaceuticals and the city’s original biotech player, Amgen.

“Very simply, a rising tide floats all boats, even large cruise liners like Amgen,” he said.

Anderson said that as Amgen, which was founded in T.O. in 1980, has been consolidating its main campus, it’s happy to see the empty buildings go to other firms in the life-science space.

Matthew Fienup, head of Cal Lutheran University’s Center for Economic Forecasting, kicked off the day’s event by talking about the state of the national, state and local economy.

He brought up Ventura County’s high cost of living—especially the cost of housing—as one of the biggest detriments to economic growth.

Stephen Hatke, vice president in charge of manufacturing for Takeda, which is in the midst of a $126-million expansion of its manufacturing facility in Rancho Conejo, talked about helping an employee move from Singapore.

“If you already live here, you don’t understand what a used car costs right now . . . or that they’re raising the prices on rent for apartments like $600 to $800 and they’re not even updating the sheet, they’re just crossing it out and writing the new price in—and there’s 200 applicants,” Hatke said. “It’s really tough right now to relocate people into this environment.”

Murphy said his employees want single-family homes, but the other panelists said all types of housing are needed.

“It’s tough. I have a son who is a junior in college and there’s no way, even if he gets a $100,000 job right out of school, that he’s going to be able to afford a single-family home,” she said.

Krause also brought up the lack of nightlife in the city.

“The one thing that young people tell me, and it’s not anything that people haven’t already heard, is that there’s no nightlife at all in the Thousand Oaks area, everything kind of closes up around 10 or 11 p.m.,” she said. “We do find when we’re able to attract younger people, they’re gravitating toward Santa Monica or maybe into the Valley where there’s more things to do past 10 o’clock at night.” 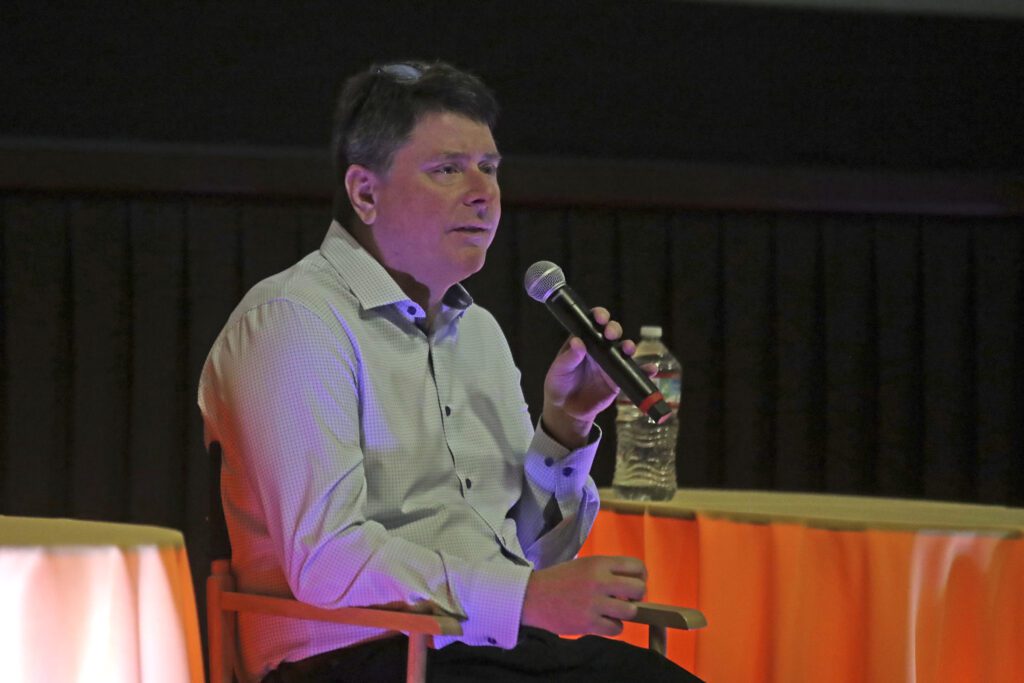 Murphy described Capsida as the “new kid on the block” but said the firm has grown from fewer than 10 employees at its founding three years ago to 120. The goal is to hit 150 by the end of 2022.

“In drug development, it is pretty well understood on what you need to do—you need to execute against that,” Murphy said. “In the short term, if we continue to execute we will have no problem meeting the 150 (employees).”

Atara opened its first location on Rancho Conejo Boulevard four years ago, when the company had around 200 employees. Today it has around 450.

Krause said being in the biopharma sector in California can be challenging from a regulatory perspective. The company recently sold its 90,000-square-foot manufacturing plant on Conejo Spectrum Street to FujiFilm Corp. for $100 million to help fund ongoing drug development.

“We are trying to be very innovative, and to be innovative you have to be fast,” Krause said. “We have patients who are dying or at end of life. We need to move, to pivot, to innovate, and how we’re able to adapt our manufacturing facilities and lab spaces is really important. And to be able to do that with speed in partnership with regulators and the people who approve the permits, and how we can make that process more quickly to service innovation would really help.”

All four executives mentioned the challenge of attracting and retaining talent.

“So whether it’s Pfizer or Moderna, they are still sucking up a lot of talent,” Hatke said. “Not only on the East Coast . . . they’re recruiting out of our areas here to pull people back into those facilities, whether it be in the Midwest or Boston, and so we’ve lost a significant amount of people to those companies . . . it’s had a big impact on us.”

Being such a new company, Murphy said, Capsida’s focus right now is on its science. If that doesn’t succeed, he said, nothing else matters.

“The next step after that is to develop products that really help society and help sick people,” he said. “That’s the ultimate goal, and I think that’s what every single person up here would say.”